GOD’S PLAN BEHIND THE ASCENSION 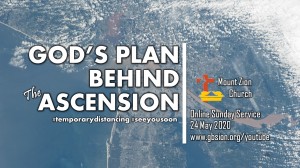 Isn’t that good to always have Jesus physically on this earth? Maybe Jesus could open an amazing office in Israel with the branch in every city in this world. Maybe that will be better from our perspective, but Jesus told us something better than that!

Forty days after resurrected from the grave, at the end of His ministry in this world, Jesus ascended to the heaven, being seen by His disciples and then they reported to everyone, up until us now, so that we can believe and put our faith in His promise. Today we are going to learn about the implication of the ascension of Jesus to our faith.

The Ascension 50 And He led them out as far as Bethany, and He lifted up His hands and blessed them. 51 Now it came to pass, while He blessed them, that He was parted from them and carried up into heaven. 52 And they worshiped Him, and returned to Jerusalem with great joy, 53 and were continually in the temple praising and blessing God. Amen. Luke 24:50-53 NKJV

1: DECLARE HIS AUTHORITY – SOLVE YOUR DOUBTNESS

Who is Jesus? Jesus is the Son of God. He is the Word that became flesh and dwelt among people Jn.1:14. He was born through the virgin Mary, but not from the seed of Joseph. Mary was betrothed to Joseph, before they came together, and she was found with child of the Holy Spirit Mat.1:18. That’s why Jesus said that He is FROM ABOVE! Jesus is NOT of THIS WORLD! Jesus is from heaven, and He must go back to the heaven. He had come from God and was going to God Jn.13:3. His resurrection and His ascension are the strong evidence about who He is!

Back to those days in Jerusalem, there was a wicked rumour about Jesus’ death. The chief priest and the elders made an evil conspiracy, they gave a large sum of money to the soldiers saying, “Tell everyone, ‘His disciples came at night and stole Him away while we slept.’ And if this comes to the governor’s ears, we will appease him and make you secure.” The soldiers took the money and did as they were instructed; and this saying is commonly reported among the Jews until this day Mat.28:11-15. Maybe there was more cheap rumours circulated around Jesus’ death and resurrection, but the Bible wants to give us a strong evidence and a strong reason to put our faith in Jesus. The ascension of Jesus is the proof that Jesus is alive, and He belongs to God. That’s why we can put our faith in Him. He is the true God. Death could not hold Him. Even this world can not hold Him. He ascended to heaven to show His followers about His authority, about His power over this world. Jesus said: “All authority has been given to Me in heaven and on earth Mat.28:18.” There is no need to be worry anymore about anything in this world, because we have Jesus who had declare His authority over this world! We can absolutely strongly believe in what He said for us because He has that authority!

2: SEND THE HELPER – SOLVE YOUR LONELINESS

Nevertheless, I tell you the truth. It is to your advantage that I go away; for if I do not go away, the Helper will not come to you; but if I depart, I will send Him to you. John 16:7 NKJV

Jesus called it as an advantage for us! What kind of advantage is that? The ascension of Jesus is a part of the grand plan of heaven to send Holy Spirit to believers. First advantage, for so long the main story of salvation only happened around Israel and the Jews. But then the salvation is opened very wide to all nations and it first happened by the work of the Holy Spirit for the Gentiles. The baptism of the Holy Spirit for the Gentiles was an undeniable fact that God welcome all nations! The book of Acts told us like this: “Peter said: ‘If therefore God gave them the same gift as He gave us when we believed on the Lord Jesus Christ, who was I that I could withstand God?’ When they heard these things, they became silent; and they glorified God, saying, ‘Then God has also granted to the Gentiles repentance to life Ac.11:17-18.’” His ascension to the heaven opened the new space and the new dimension of the work of Holy Spirit for us. Jesus go back to the heaven and the Holy Spirit work mightily to start the church. Jesus go away so that the message of salvation no longer limited by the nations nor traditions. The work of the Holy Spirit had already been promised from the day of Old Testament Joel.2:28-29 and the blood of Jesus upon the cross opened the way for that promise by taking away sins of the world Heb.10:4, Jesus is the Lamb of God who takes away the sin of the world Jn.1:29.

Second advantage, we are not alone! The Helper is sent that He may abide with us forever. Jesus said that He will not leave us orphans Jn.14:16-18! Loneliness is dangerous! Even Elijah the prophet was distressed when he felt lonely 1Ki.19:10. Do you feel lonely? Jesus sent the Holy Spirit so that we will never feel lonely. Holy Spirit want to abide in our life, He is the Helper, the Comforter, He wants to always be with us, He wants to walk with us and guide us into all truth. Believers should not feel lonely anymore!

3: HE WILL COME AGAIN

9 Now when He had spoken these things, while they watched, He was taken up, and a cloud received Him out of their sight. 10 And while they looked steadfastly toward heaven as He went up, behold, two men stood by them in white apparel, 11 who also said, “Men of Galilee, why do you stand gazing up into heaven? This same Jesus, who was taken up from you into heaven, will so come in like manner as you saw Him go into heaven.” Acts 1:9-11 NKJV

The Ascension Day was happened with an important promise! Right after Jesus disappeared from the sight of the disciples, two angels stood by them and declared the promise about His second coming. And just like how they saw Jesus was taken up and hidden by the cloud, so the same thing will happen when He come again. The second coming of Jesus is something that will happen very sure! While the Bible told us that He will come in the cloud just like what had happened in the Ascension Day, the Bible also told us that He will come, and His feet will stand on the Mount of Olives, and the Mount of Olives shall be split in two, from east to west, making a very large valley Zech.14:4. These are not contradiction, but instead these promises complete each other, because His second coming will happen in 2 stages.

The first stage of His second coming will happen in the cloud. He will come in the cloud to pick up the faithful believers. Apostle Paul wrote: “For the Lord Himself will descend from heaven with a shout, with the voice of an archangel, and with the trumpet of God. And the dead in Christ will rise first. Then we who are alive and remain shall be caught up together with them in the clouds to meet the Lord in the air. And thus, we shall always be with the Lord 1Thes.4:16-17.” This also called as rapture, which will happen in the middle of the 70th week of Daniel’s prophecy, before the day of Antichrist.

The second stage of His second coming will happen in the place that will be called Armageddon Rev.16:16 or Mount of Olives Zech.14:4 where God with the saints will fight against nations. This day also called as the battle of that great day of God Almighty Rev.16:14. This is the day which Enoch had seen in his vision as the day when the Lord comes with ten thousand of His saints, to execute judgment on all, to convict all who are ungodly among them of all their ungodly deeds which they have committed in an ungodly way, and of all the harsh things which ungodly sinners have spoken against Him Jud.1:14-15.

As now we are remembering the Ascension Day, let’s also remember and always put in our mind that Jesus will come again, and how wonderful is that when we will meet the Lord in the air! Let’s be ready and get prepared for that glorious day.

And the response of the disciples was worshipping Him, and then returned to Jerusalem with great joy, and were continually in the temple praising and blessing God.

They worshipped because they knew for sure who had the authority over all things in this world. That is JESUS!

They praised and blessed God because they knew that Jesus will come again for the second time and they wanted to get ready with the life that always watchful in praising and blessing God.