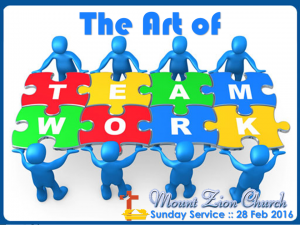 Life at church always involve each member to work together for one purpose. Church is also called as the body of Christ, consist of many members yet one body, unity in diversity. Each member has their own role and responsibility, no one ever can say that one member is less needed than other member and vice versa. The war at Rephidim was a proven evidence that each member gave a very important contribution to gain victory over Amalek people. The winning team was not the prayer team alone upon the mountain but also the soldier team downhill led by Joshua. The keyperson was not only the older generation who dare to pray but also the younger generation who dare to obey. Teamwork at church is an art rather than a theory since it occurs across the culture, language, background, even generation; very dynamic from time to time, very unique from one local church to another church. Teamwork that really works will bring a victory, shape a history, and even bless each member with heavenly attitude. The diversity is not meant to be a reason for perplexity. God who creates diversity also able to promote unity among His body.

THE IMPORTANCE TO WORK AS A TEAM 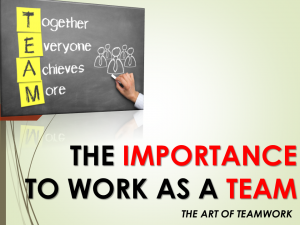 Suddenly the people of Amalek came and fought with Israel in Rephidim Ex.17:8. This was the first war recorded after Israel left Egypt. At Bible times Amalek was first among nations Nu.24:20. Amalek was very deceitful and tried to attack Israel from the rear ranks rather than face to face. Without any alarm of war Amalek attacked Israel when they were weak and tired De.25:17-18. In our journey of faith Amalek represents the most deceitful enemy that we ever have: the devil, who walks around like a roaring lion looking for someone to attack and eat 1Ptr.5:8. The devil is very tricky and very well-experienced to detect any weak-point anyone may have Lk.4:13. Without the power of church teamwork it will be more difficult to disentangle any issue raise in our local church. The enemy’s attack can come from various condition in order to suspend either the growing of church or the maturity of our spirit. As Amalek people want to stop Israelites journey so they would never reach the land of promise 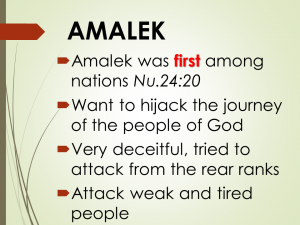 so the devil wants to stop our journey of faith so we will never reach the fullness promises from Christ. 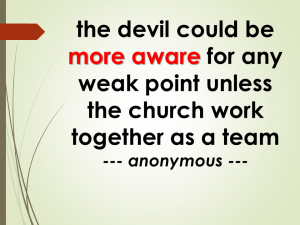 The devil can attack those who were weak and tired with the burden of daily work so they don’t have even any minutes doing their devotions. The devil also can attack the youngest generation at church so there will be no more generations to succeed the legacy of the local church. Technically the devil could be more aware for any weak point unless the church work together as a team. More eyes with one passion will be more aware for any leak may occur. More brain with one accord will bring out heap of worth advise that lead to safety and victory Pr.11:14,24:6.

WORK TOGETHER ACROSS GENERATIONS 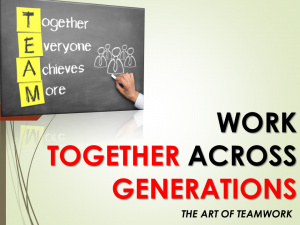 The winning team of Israel at war of Rephidim involve Moses, Aaron, Hur, Joshua, the soldiers, and also all Israelites. As an experienced generation, Moses gave a command to Joshua and ask Aaron and Hur went with him to the top of the hill Ex.17:9. As a younger generation, Joshua and the soldiers gave a full respect to Moses’ command and did exactly as he wanted to Ex.17:10. Each generation has its own gift and ability. While the younger one has more strength, muscle, creativity, and freshness of idea, the older one has more experience, wisdom, strategy which can never be ignored even in this modern days. God always ask the younger one to show respect and honour to old people Lev.19:32, including our parents and also our leaders. Though sometimes it could be difficult, tricky and annoying to be done but God still ask us to do that and even God promised a huge blessing for those who obey and respect the older people Eph.6:1-4. 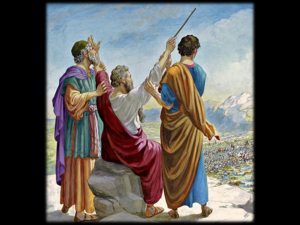 The victory at Rephidim also taught us that we could never gain any winning if we always work solitary. Somehow Moses asked Aaron and Hur to accompany him to the top of the hill, but when the prayer commenced it seemed that Moses did it lonely while two other may be gazed at the war downhill. Indeed, Moses had a very powerful prayer but however the power of one person is very limited and will exhaust himself. Lift up a hand while pray actually talked about sacrifice Ps.141:2 and also holiness, keep from angry and any arguing 1Ti.2:8. Walking in holiness and righteousness of God never meant to be done alone since God already put His people in the body of Christ. We need to support each other. Moreover, in this last days we need to encourage and 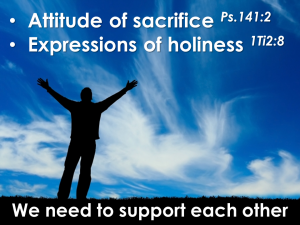 strengthen one another, support one another so all of us can lift up our hands, give the best sacrifice for God which is our life Rm.12:1. Aaron and Hur need to sit next to Moses to support him so his hands keep steady until the going down of the sun Ex.17:12. The teamwork at the church require us to always support one another, give a right spirit and encouraging atmosphere so each member of the church can grow in grace to the fullness of Christ. For those who already weary in spirit we need to cherish and hold their hands so they could stand up again and walk in the right way Heb.12:12-13. Although Moses was an extraordinary person who split up the Red Sea he still really need the presence of Aaron and Hur to help him side by side. An enemy might be able to defeat one person, but two people can stand back-to-back to defend each other. And three people are even stronger. They are like a rope that has three parts wrapped together—it is very hard to break Ec.4:12. 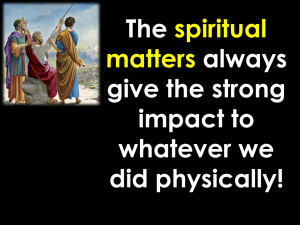 The amazing fact is the quality of teamwork closely related to the result of the war. Moses realized whenever he held up his hand in the air, the men of Israel would start winning the fight. But when Moses put his hands down, the men of Israel began to lose the fight Ex.17:11. Maybe at that time Joshua and his soldiers did not realize yet that their winning was depend on the hand of Moses but this truth explain clearly to all believers how the spiritual matters always give the strong impact to whatever we did physically! The prayer of the housewife can bring the blessing for the husband at workplace and the children at school. The prayer of the parents can lead their sons and daughters to gain successful achievement at their career. The prayer of church member can open the closed door and solve the restless struggle faced by another department or ministry. The prayer of the older generation can assist and support the younger generation facing the challenge they may have in this modern and wild world. In the other hand, behind the success and achievement we received let us acknowledge that someone is praying for us. Behind the miracle and blessing we get let us admit that someone is praying for us. 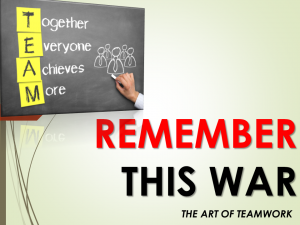 Specifically, God asked Moses to write down that victory in the book for memorial so all people in Israel including all believers nowadays can remember what already happened at Rephidim. Not only about the winning over Amalek but also the art of teamwork between uphill team and downhill team. The Lord also said to Moses that He will completely destroy the Amalekites from the earth Ex.17:14-16. As the devil still have a chance to attack the believers until today so we can understand that the commission to destroy the Amalekites become our legacy, the legacy of the people of God, the legacy of Christ’s follower. With the same strategy we can destroy the trick of the devil. We need to always promote unity rather than diversity. We are here at our local church, at this specific years, to build unity and work together as a team for the glory of God’s Kingdom. 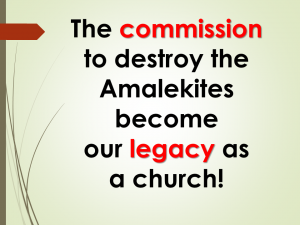 At the last night before suffering at the cross Jesus prayed so all believers may become ONE as Jesus and God the Father are ONE Jn.17:21. All members at the church are meant to work together as one body. All members at the Christian family are meant to help and support each other so each member can grow together and bring lot of advantage for the growing of the church. Even all Christians in this city, in this world are meant to work together as one body, which is the body of Christ, so God’s Kingdom will come and that what God want will be done on earth as in heaven Mt.6:10, the devil will be destroyed completely and we will reign together with Christ not merely for 1000 years Rev.20:4 but also for eternity Rev.22:5. So now let’s work together as a team, put aside all 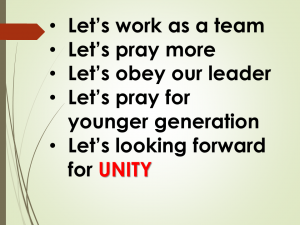 diversity that can lead to destruction and let’s looking forward for unity. Let’s believe that Holy Spirit can teach us and lead us so we can have the right attitude of teamwork, a humble spirit, and a healthy eye of faith that dare to accomplish the will of God in this earth. AMEN.