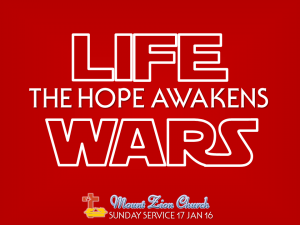 When life getting hard, when it seems that there is not any reason again to put any hope, when things in life don’t go exactly as planned, truly that is the best time to come closer to God and learn from the most awesome character on the Bible: ABRAHAM. Abraham is the father of all that believe in God’s promises. He was not a perfect man but he let God took his hand and keep obey at His command and guidance. Once he made mistake but he did not let that fault keep him stumbled. And the most important thing is Abraham always let the new hope awakens in his journey of faith!

DO NOT LAUGH AT CONTRADICTION

… who, contrary to hope, in hope believed, so that he became the father of many nations, according to what was spoken, “So shall your descendants be.” And not being weak in faith, he did not consider his own body, already dead (since he was about a hundred years old), and the deadness of Sarah’s womb. Romans 4:18-19 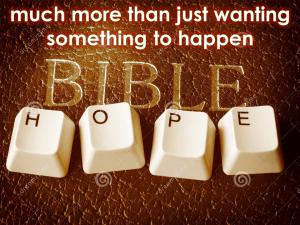 In the biblical sense, hope is much more than just wanting something to happen. It implies certainty and involves confidence and a real sense of expectancy. Even it seems impossible for something to be happened, as long as we have a promise from the Bible we can put our hope rather than only make a wish. Abraham received a vivid promise from God that his descendants will be as much as the stars of heaven. That promise not only spoken by God to cheer up Abraham and his wife, but God really meant it. For Abraham and Sarah that promise was seemed totally impossible. Abraham body was really weak since he was about 100 years old and Sarah’s womb already dead. The book of Genesis record that both Sarah and Abraham was once laughed because of their unbelief Gn.17:17,18:12.

And the Lord said to Abraham, “Why did Sarah laugh, saying, ‘Shall I surely bear a child, since I am old?’ Is anything too hard for the Lord? At the appointed time I will return to you, according to the time of life, and Sarah shall have a son.” Genesis 18:13-14 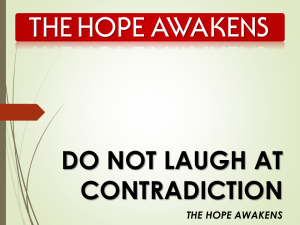 God called out Abraham from his country around 2091 BC when he was about 75 and Sarah was about 65 and God already mentioned about His promise to give the land to Abraham’s seed Gn.12:7. After years by years Abraham and Sarah then lost their hope. The promise from God really contrary to the fact they saw. But God wanted to teach them that there is anything too hard for the Lord! Trusting God in difficult situation will develop our faith and teach us to be patient in hope. Whenever we face any difficult problem and complicated 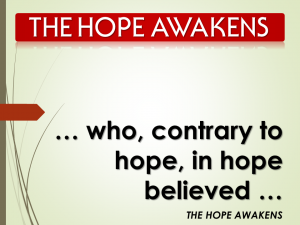 situation let’s learn not to laugh on God’s promises. Even when it seems totally contrary to what people can think let’s acknowledge that our God is not a human being. His ways are higher than our ways, as well as His thoughts, as far as the heavens are higher than the earth Is.55:8-9. Rather than laugh at God’s promises let’s fill our heart with biblical promises as we start this wonderful year. Never give up for any impossibilities we already faced in the recent year. Let’s stop laughing and keep believing as Abraham and Sarah did because God really meant His words and He will take it seriously. 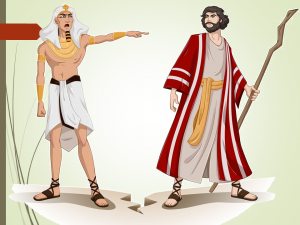 When Moses was in charged to lead his nations doing exodus, the Bible noted that Moses was give up for several times. God asked him to bring His people out from slavery but it became more complicated and not as easy as it was told. And the situations became more impossible as Pharaoh hardened his hearts and did not want to let the Israelites go away. The God’s promise to leave Egypt and serve Him seemed very difficult to be happen and that one really contrary to the fact they faced. But once again the Bible proved that God never wrong and He never failed. The attitude of Pharaoh and Egyptians became a great chance to perform more wondrous miracle as testimony not only to Moses and his nations but also to all believers until now.

But the Lord said to Moses, “Pharaoh will not heed you, so that My wonders may be multiplied in the land of Egypt.” Exodus 11:9 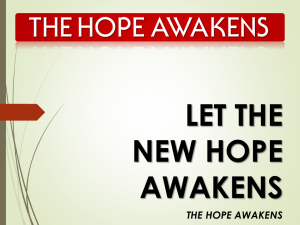 As time goes by, hope can be blur and fade away. But Abraham did not let his faith being weak. He did not laugh again but he renewing his hope. He did not waver at the promise of God through unbelief, but was strengthened in faith, giving glory to God, and being fully convinced that what He had promised He was also able to perform Rm.4:20-21. This kind of hope must always fulfil our heart and our mind. Let our faith be strengthened day by day so we can keep our hope alive and moreover we can reveal the new hope. Sometimes we could discover a freshly new hope that speak personally when we dig down under the Bible’s verses Rm.15:4. Sometimes we could reveal a brand new hope when we start to sing, praise, and worship Him in our difficult moment. Sometimes we can get a strong hope when friends in Christ share their experience with God recently. 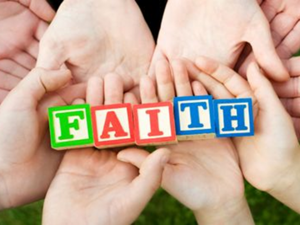 Sometimes we can receive a sure hope when we hear the Word of God at church. Let’s strengthen our faith and don’t let the precious hope keep hidden under dusty things. Do not give up in the first step, second step, even in the hundreds of step knowing that God able to perform His promise. Let every hope awaken right now! The sleeping hope is very dangerous. Sleeping hope can lead to a frozen heart that very difficult to believe again in any promise nor any surprise someone can receive. When Joseph was taken from Jacob he was very distressed, lost his hope, refused to be comforted, and longing for die Gn.37:34-35. After several years Jacob’s hope still slept and very difficult to believe that Joseph still alive Gn.45:26. Sleeping hope can draw back any believer to their old life style and old habit as happened at Peter and his friends Jn.21:3. Do not let our hope died. God’s promises will bring a new hope. Sometimes we may see a new obstacle and problem instead of answer and solution, but let’s believe that the new problem will discover a new hope as well. Be strong as we have a sure hope from God of hope. Life without hope will bring a day filled with drought. 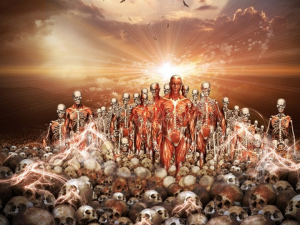 When God took Ezekiel to the valley of vision, no other things he can see except a valley full of bones and indeed they were very dry Ez.37:1-2. That dry bones looked impossible to live again. God told Ezekiel that those bones are the whole house of Israel who said: our bones are dry, our hope is lost, and we are ourselves are cut off Ez.37:11. But when the word of God start to be pronounced, when the Word of the living God start to be declared, there was a noise and suddenly a rattling, the bones came together, bone to bone, the sinews and flesh come upon them Ez.37:7-8. And that life was brought into perfection when the Spirit of God start to be breathed into them, no more the heap of dry bones but an exceedingly great army Ez.37:9-10.

Let our life may abound in hope by the power of the Holy Spirit. Jesus Christ died upon the cross so we can have a sturdy hope in our life 1Ptr.1:3. Without Christ people will have no hope about eternity Eph.2:12. But Jesus come to redeem us and give us a new life abound in hope. The same breath at the vision of Ezekiel also given to us by Jesus. After His resurrection Jesus met his disciples and He breathed on them and said: “Receive the Holy Spirit.” Jn.20:21-22. Only the power and the work of Holy Spirit can keep our hope alive. Let the Holy Spirit lead our step and let the new hope awakens. AMEN.

Now may the God of hope fill you with all joy and peace in believing, that you may abound in hope by the power of the Holy Spirit. Romans 15:13